I was a little unsettled before we arrived at the parking area because Bozeman had survived 3 major snowfalls since we were there last. We had done a scout trip on a Wednesday Night Adventure. And even then going was tough due to the lack of snow machine traffic. Heavy powder is tough to push through as all us fat bikers know. And with my partner verging on sickness I suspected we would turn around and just go to the hot springs instead. 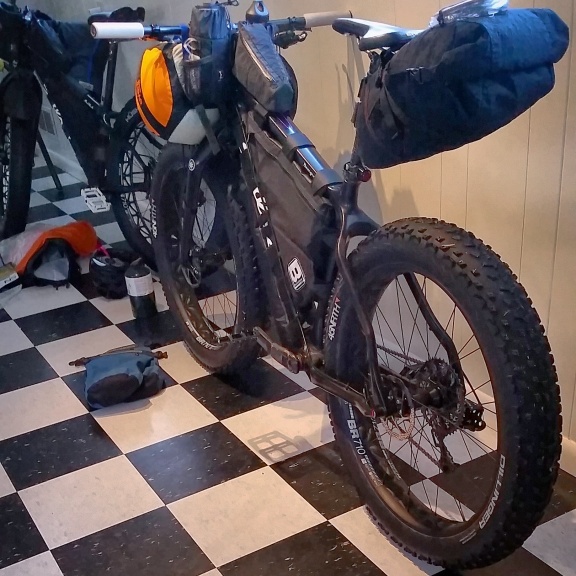 All packed up and ready to go

Leaving the vehicle my hopes went up and it seemed that maybe things would be packed down and doable. The only thing that could get in the way would be if the warm temps were so warm that we fall through and couldn’t ride. Which would be the show stopper. 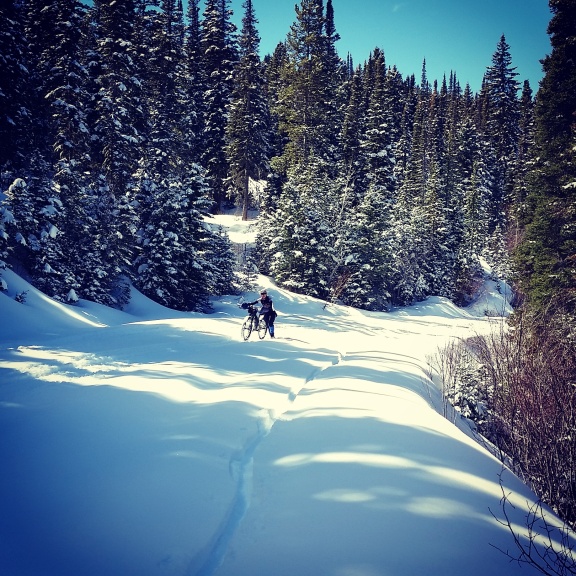 With the snow warm and the lack of machine traffic we were delegated to walking the last 5 miles.

5 miles out and at the base of the big 2 mile climb things turned sour. Indeed it was hot enough and we could not float the crust or peddle through the fresh wet powder. Only 1 snow machine had been up there that morning and their track was not enough. I waited for Mo to make “the decision”.

“let’s just push for an hour and then see if it improves”, she said.

I knew it wouldn’t but what the heck. A hour of nice sunny day of easy pushing … right? Walking in the track was not that hard. And then there was the fact that I could ride certain parts. Actually I cleared 60% of the 2 mile climb. Mo did not. And that was 2 hours after we wanted to make “the decision”. And then it was too late. We might as well push to the cabin at that point.

When the one snow machine track we had was not enough to hold us any longer the pushing became very hard. I did not want to kill my partner so I force-ably made her LET me push her bike. She did not have the energy to fend me off and just let me. I would of never gotten away with this tactic if she felt OK. So my routine was to push my bike through the heavy snow for a mile then run back and push hers on my track … kind of a rest push as you will. 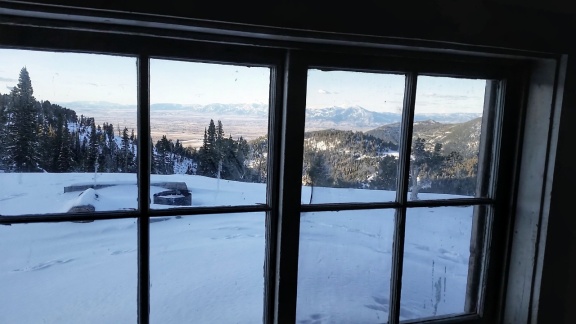 The view out the window

We made it to the cabin almost 5 hours later and I went to work to get it warmed up. Neither of us had the energy for anything else and just passed out in the bunks.

After a 5 hour journey we sat around the fire to warm our bodies.