We were sick. But when you already have the forest service cabin rented it can somehow inspire you to go anyway. Even for a couple of sick people. Saying, “we can probably just drive it it anyway”. The fatbikepack into Hells Canyon Guard Station was pretty taxing and probably not the best decision we have ever made.

When Mo passed out in front of the wood stove I realized that maybe this was not such a good idea. I was up all night making tea and keeping things warm. Mo wheezed and coughed.  As the sun cracked the ridge the coughing stopped for 5 minutes. I slipped outside to check out the surroundings. Then a storm hit.

By the end of the storm Mo was up and messing about. I went outside to grab some wood and to also discover that we got a fresh 4-6 inches. There is something about fresh snow. It’s inspiring some how.

Even for a couple sick people and inspiring enough to do an adventure ride. Say, “just down the road a bit to see how the conditions pan out”. Turns out conditions were perfect and we went a lot further then anticipated. Mo played it safe and went back early while I stayed out.

I rode to the top of a ridge that looked out over the valley where we came from the night before. I wondered if Mo made it back to the cabin. I figured I better check and rode back. She was nestled in drinking tea and doing cross word puzzles.  And then the sun came out. 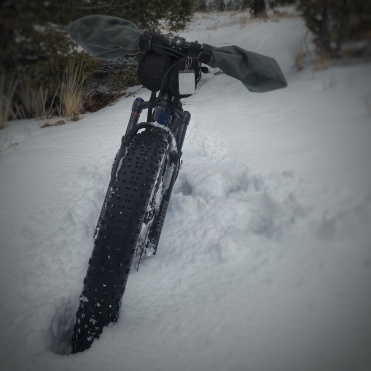 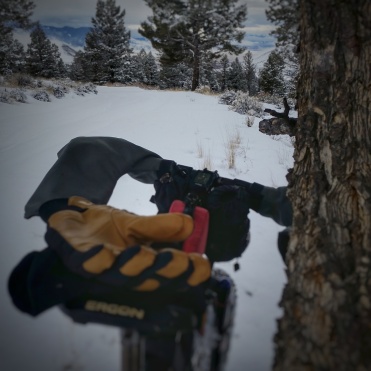 There is something about the sun shine. It’s inspiring some how. Even for a couple sick people and inspiring enough to do an adventure hike. Say, “just down the road a bit to get some fresh air”.

But the little adventures started to take their toll and we found ourselves back at the cabin to take naps and try to recover. The sun was setting and another storm rolling in. There is something about the darkness during a storm. It’s inspiring some how. Even for a sick guy and inspiring enough to do an adventure ride. Say, “just up the road a bit to test the way out tomorrow”.

And then I did it again. Got lost in the adventure. Riding by headlamp, pressed for time because a storm was near. Plus I was halfway around a big theoretical loop. Mo was monitoring me via radio from the cabin. But then I rode out of radio range. Now alone should I go for the loop or turn around? I went for the loop.

There is something about going for it without anyone knowing where you are headed. It’s inspiring some how. Even for a sick guy and inspiring enough to finish an adventure loop. Say, “I know this loops around somehow”.