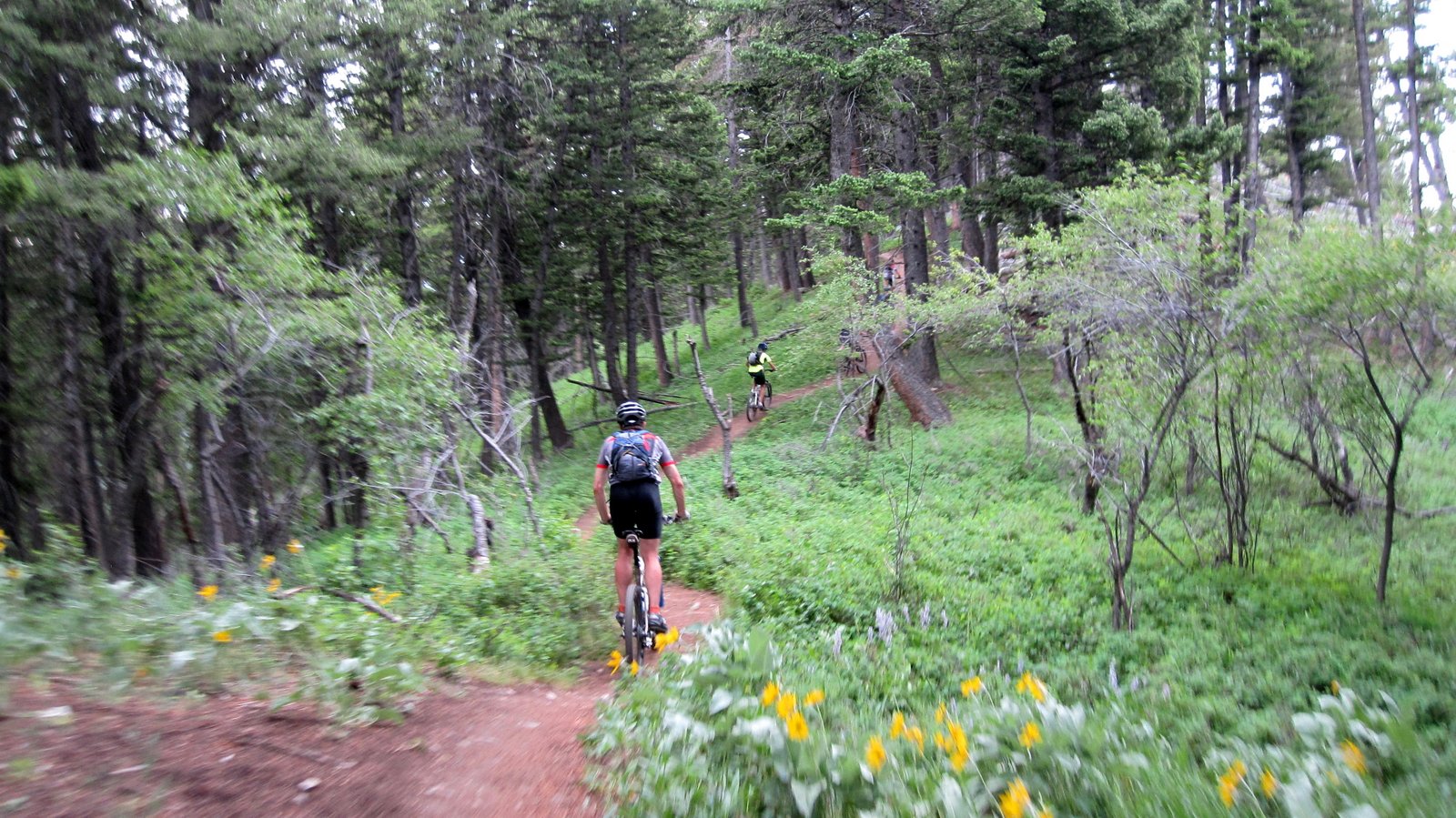 It was only a matter of time before “an entity” came into my “place of being” and started verbally accosting  me, physically protruding its probing apparatus into my arm, and hitting my computer screen. Once the “entity” does that it frees me up from giving a shit about “my moments obligations”. So I will blog, and blog it will.

Last night was another installment of the Missoula Thursday Night ride and the place of existence was the Snow Bowl Ski Area. Half the group was committed to going all the way to Point 6. This afforded me the opportunity to come along instead of going off somewhere alone to do my workout. I had 4 X 15 minute hill efforts to do.

As we started out everyone was going up the bear grass highway. I was hoping for the access road that goes around and through the wooded areas off the back side. This would allow me to “do my thing” and then when done catch back up with the group. The bear grass highway is a single-track which meant if I were to put in a little effort it would really disturb the groups so called laid back atmosphere.

As I spun along behind (I was late) it became apparent this was not the Thursday Night Ride but instead a “race to the top”.  There were dudes hammering it out to be king of the hill. Everyone was spread out along the trail. So I figured what the heck, might as well do my efforts and pass everyone like it is a race. The dudes up front were hammering … the race was on. Right? I thought so.

I began effort #1 at the bottom of the “headwall” a portion of the trail that turns and goes straight up a rocky path for about 50 yards. Its a tough grunt so I knew I would not have any trouble getting my heart rate up. I pumped up it and passed a few people. I got behind one rider and my HRM started to beep.

“My heart rate monitor. Its beeping because I am going to slow.”

So I did. I caught the entire group (Dave, Jim, Ed [who was leading]) before the ski hut at the top of a chair lift and ended my first 15 minute session. I was hoping I would not run out of mountain and thought I should of started my efforts right away and went up another route. I felt kind of bad interrupting the group’s laid back atmosphere. All the more to hammer and now the trail is clear.

After 10 minutes I started effort #2. Instantly I was cruising up the slopes of Point 6 dreaming that I was winning the Leadville 100 and putting AssStrong in difficulties. Soon I was passing the “other group” and was so close to the top when 15 minutes ran out I decided to extend it to 20. I topped out and meet the rest of the “other group” waiting for their comrades.

I rode down the ridgeline and dropped back down to the start of the final climb near the saddle between the lift tower hill and Point Six. I started effort #3.  This effort finish at around 13 minutes and since my previous was so long I decided to call it a day. I was feeling it in my legs.

So now that we all had it out on the slopes of Point Six we were in a more communal mood and it became a group again, at least for me. We talked, gandered, and took photos on top before bombing back down to the lodge.

The worst part of the entire adventure is all the blow downs on the trail. I was going from one blow down to the next waiting up to converse with friends and enjoy the cool evening air.

Some of the jaunts over the fallen trees were pretty exhausting so I took a couple “rest sessions” and contemplated the upcoming weekend. A hard ass training weekend. Argh! I wanted to hang out with friend this weekend.

The post ride party was one of the largest I have been involved with. food everywhere with brats sizzling on the grills. Beer was flowing and I broke out my highl
y secret stash of smoked fish that Ross made me. We talked and mulled around until it was dark which in the summer means LATE.

Butte 100 training tomorrow. Two options, one being stay in town and do 2 6 hour all out efforts or two going to Butte and pre riding the course while putting in my 6 hour efforts. Then it is all rest for a while. I cant wait to hang and do things with friends more. Got to look good riding with Tinker … right?