All winter we have been working our way up Gallatin Canyon trying all the snowmobile routes. We bought a snowmobile pass … why not use it? Add to that our complete lack of what others call SPRING. Our last stab was Moose Creek and this time we set our eyes on Portal Creek up to the Windy Pass trailhead.

Since these days spring does rear its beautiful head every now and then we wondered if the trail was even being used any more. After some trouble figuring out where to park we discovered that the trail was still actively being used. So yippee. Although a lack of grooming meant huge fields of whoop-tee-doos. Which is fun in their own way while coming down. Think enduro doubles practice.

So far this year we have had good luck hitting these trails just after a groomer had set things up. This time, however, we were riding on pure snow machine pack. Down low it was not too bad, but when gaining altitude it got soft and slow. Did I mention gaining altitude? Yea, lots of climbing. Maybe in the summer, one wouldn’t think so but on fat bikes, it was “holy cow”.

The day was disappearing and we started to lag a bit when finally topping out at the trailhead. So really a great place to turn around. Plus it was pretty much where we would drop to the other valley anyway. The Windy Pass trail is absolutely banned for bikes, not that I care. But it was time to turn around and the big trailhead sign was in a snow well. Still, the snow is so freaking deep …  it’s incredible. 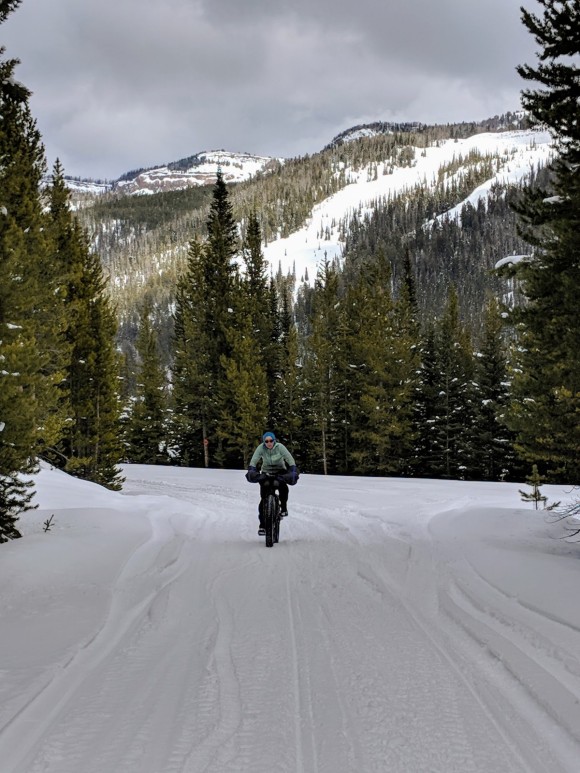 A couple shots of our surroundings then it was time to bomb down the hill. We dropped our seats and pointed it down. Nothing happened. I shifted up. Damn, it looks like we’ll have to pedal out. By the time I started to wonder about our exit time the bike started to roll a bit and soon I was careening down the route from which we climbed. 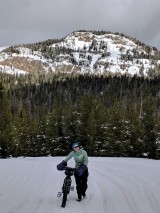 I practiced doubles until I was exhausted. Well, what really happened is that I nearly landed one wrong and almost shot off a steep hillside. I calmed things down so we could leave this place without donating any blood.

A pretty uneventful day doing what we must to get through this damn long winter. Spring still not certain, and with us moving out soon … I wonder if we will even see the ground before we head to Livingston. It’s snowing out as I write this.