I distanced myself more and more from Missoula touting it as a lonely place. Even though I had numerous friendships. I was just feeling sorry for myself and leaving town when I could.

When I was home I would blog about my adventures with embedded messages that said, “help I am lonely”. Embedded because I always cherished my solo lifestyle. I didn’t really understand what was going on.

After one such big adventure into Idaho I stopped by the Orange Street Market for some fake bacon. At the time I was unaware that real bacon was good for you. But continuing on with this story I spotted a familiar face. This person did not spot me and before she could escape I yelled out her name, “Mo”! I waived.

“Wow, that is cool”, she said and I glistened with pride.  I felt like a grade schooler showing my crayon drawing to the teacher.

And that was it. That is all I had. Sure I had plenty of questions. But my mind was jumbled. It was all I could do to walk one isle to discuss what I was there for. I grabbed my bacon and ran. I would learn later that I grabbed turkey bacon and that was not a great impression.

The biggest joy, when I did find it, was riding with my Thursday Night Family. Specially when Mo would show up on her cross bike. This person was so cool. She could ride that cross bike anywhere the group would go. I avoided taking photos because I didn’t want to come off creepy. But then when I stopped for photos of the group going through something like say a creek. And she just happened to be coming by.

But, if your trying to impress someone don’t just take photos of when they fail. Mo misjudged a creek crossing  and put her foot down. What mountain bikers call a dabble. Darn, just when I thought I would capture her greatness on a bike.

In numerous Thursday night rides we started to chat more and I was trying to figure out a way to show her I was interested. For instance one of my greatest moves was to suggest she partake in the after ride social that TNR is famous for. She agreed one time and I think it was because it involved ice cream. A person after my own heart.

At said ice cream gathering I popped the question.

“So you know Josh, right? Well he is having a party. Did you hear about that?”, I stumbled to get out a cohesive question. They both worked at Adventure Cycling and I knew they might already now each other.

“I am not sure, I’ll check my calendar … maybe”

So I gave her the details and we all dissolved back into our lives. I never went to parties. By by damn, I was going to this one.

I emailed Josh about his shin-dig and let him know I asked one of the TNR folks if they wanted to go and if that was OK. I was told that she got an initial invite but never replied.  Just doing my part to bring people together … right? That felt awkward.

At the BBQ I tried to blend in. Social gatherings made me feel quite odd. I grabbed a beer and joined in on a hula hoop contest. I destroyed it. As everyone walked away from my display of endurance whooping I noticed that Mo had indeed shown up.

Again she seemed to be greatly adored by everyone and a jewel of the party. Just like the previous year demonstrating that moonwalk at the holiday party. She engaged in smart conversation and quick puns. Everyone enjoyed her company.

I found three main instances where I inserted myself into the Mo experience.  Once to show a video of my friend playing drums, again with that damn iPhone.

I attempted to talk her into a weekend of riding in the Bitterroot Valley. I was immediately questioned about what time in the morning this be. I suggested a modest 8 am and was told, “good luck with that”. I didn’t press on this issue.

Then with some beer induced conversation about how I should read poetry at my next solo 24 hour race, you know, to pass time. I agreed to do that. And the party dissolved. I went home and thought about missed opportunities. The next day I rode all day in the Bitterroot.

I never read poetry at the Spokane race. I got so caught up in winning it that I forgot. Then I won another race in Rapeljie. And of course my good luck rolled into a new Job in Bozeman. Life was looking up. Opportunities abound.

The entire group that I would be missing someday 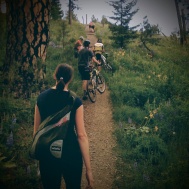 My TNR family threw me a going away party on top of Sentinel. As the toasts were given I did not show a lot of holding back the tear endurance. I started to realize what I was leaving behind and how much I actually was a part of people’s lives here.  Was I making a mistake?

And Mo was there. I found some time to catch up on her adventures and the news that she was buying a new mountain bike. I talked merits of full suspension and gave some advice. She told me about places to go in Bozeman that were cool. As I walked with Lydia back down to the trailhead Mo stopped by on her cross bike.

“Just wanted to say goodbye”, she said and then rode down the hills.

I turned to Lydia, “Am I making a mistake”?

Seriously though, what WAS I doing? Why was I running away from the very town that gave me so much happiness. Too late now. I needed to grow up and get that good job. Make some money. Pay off some bills. And focus on the new opportunity.

The van is all packed

Moving out … I loved this apartment

And I moved. Just like that my interests in Missoula banished. The new life was in front of me. But first, one more stop at the Bridge Pizza. To get my favorite slice. And wouldn’t you know it?  I ran into Mo again … moments before leaving town. I flagged her down for some small talk. Then I drove away with tears welling up in my eyes. And it started to rain. It felt more like a funeral.