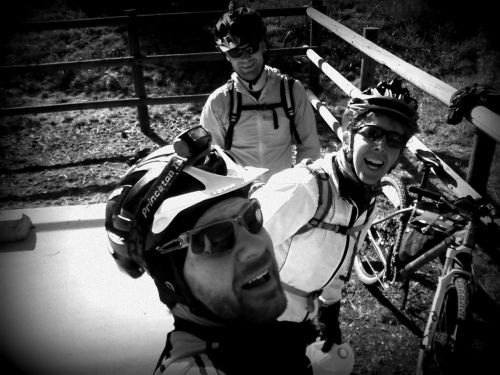 “Anyone want any coffee”, Norman announced.

“I DO”, I bellowed out so urgently it cause everyone to look in my direction.

I proceeded to tear into my frame bag and produce a tube of butter and a vial of MCT oil. I then continued to chop off a hunk of butter and put it into my mouth. Then I squeezed in a big squirt of MCT oil.  Followed by a cup of coffee from Norman’s thermos. Everyone looked on in horror.

To take the focus from my interesting caloric intake I proposed the statement, “Ah … the RMVQ Snow Bowl climb … it is where everyone cracks.”

“You will see, I usually start to feel bad there too”

Aaron busted up the Snow Bowl climb first and I expected Ed to go with him. but instead we found ourselves riding together most of the time with Laurie just behind. Behind us was Norman on his pace. It was a fabulous climb and soon enough we started collecting at the a-frame.

The troops looked a little rattled and Ed admitted that maybe the climb was a little longer then he expected. Even Aaron who looked fresh all day started to have a little color to his face.  Norman looked a bit desperate as he approached the top.

But me, I felt fine. I quickly posted a Marcy pic and prepared to rip down the Beargrass Highway. My diet of “not much” and pace really was paying dividends. And I felt extremely excited and happy to have such great friends to play with.  I set off wailing, “WAHOOOOO” and bombed down the single-track track.

Aaron did catch me taking a break and we rode to the Rattlesnake trailhead together.  It was the end of his ride, quite large indeed. This section of RMVQ he did with us was 72 miles but he also rode from home before that. I wondered if maybe this was like mile 80 for him. A big endeavor … and such a strong ride too.

Everyone else trickled in as I took part in the Halfway BBQ festivities.  Ed had torn away from the pack before the Ravine Trail to get to his second gig, playing jazz drum at a winery. How on earth does one pull that off? Ed does.

Laurie came riding into the party moments after Aaron and I. She had the biggest grin and opened her arms for a bug hug. Her day done as well ticking out over 40 miles. Of course that does not include the extra mileage that she and Ed rode to Kona Bridge.  My friends, carrying on the “go big” tradition.

“Thank you so much Bill”, she whispered in my ear. And I know what she meant.  These are the moments that I ride for. It was the end of the day for everyone and I felt my soul go cold. From here on out it was just myself versus Sheep Mountain.

Norman come into the party as I took part in the annual hula-hoop contest. I can hoop, yes, indeed. But I am not as good as Julie and Lydia. Who took center “parking lot” to do hula-battle.  I think a tie, hard to tell.

“It was good to spend the day with you”, he said. Norman, also with that look in his eye.  Gosh, it was nice riding with my Missoula family again. I set off to the cheers and left everyone behind.

“I am coming for you”, I said under my breath and looked into the direction of Sheep Mountain.

Thanks Bill…loved reading this and feeling a bit of the day. You have great friends. 🙂

Another awesome write up. Somehow I had missed this part. Great post of a great day!